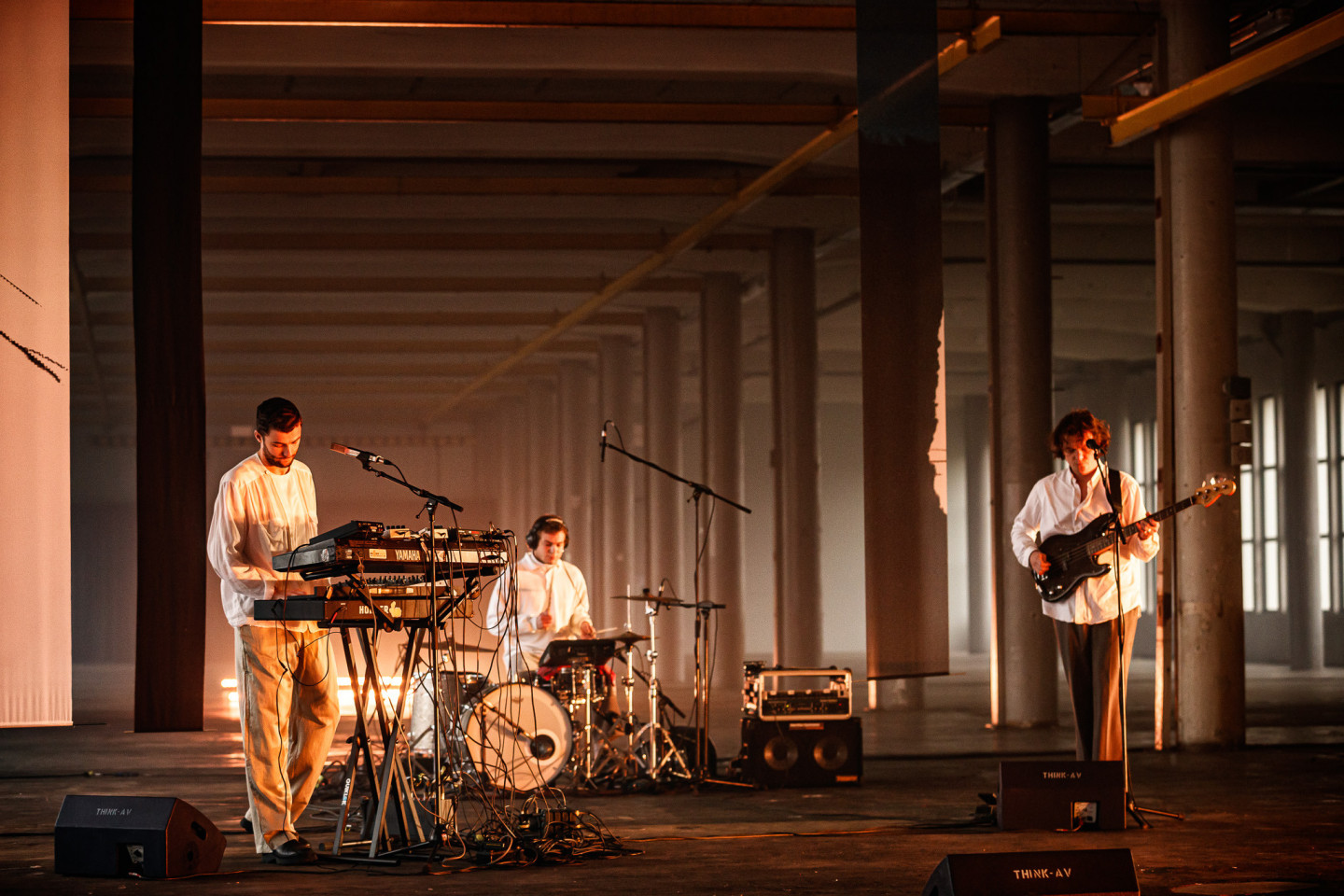 Over the past few years, more and more acts pop up that combine the Dutch language with thrilling electronic beats. In many cases, it results in a combination that wouldn’t look out of place in the Muziekgebouw aan 't IJ, but can also enchant a steaming and sweating Greenhouse stage at Dekmantel Festival on a Sunday afternoon. One of these acts is Meetsysteem, an artist at the intersect of synthpop and electronic love songs.

Last year, he released his first album Geen Signaal which included tracks like Teal and Goed Te Doen on the leading Rotterdam label Nous'klaer. In the Dutch music world there was almost unanimous conformity: it was a dream debut. Suddenly there was a new artist who, with his associative and sometimes puzzling Dutch-language lyrics, managed to make a connection between the alternative nightclubs and pop festivals.

And now there is a new record from the man behind Meetsystem: Amsterdam based multi-instrumentalist Ricky Cherim. In this interview, we speak with him about his new album Cr:GO which was released last November. On the Monday the 14th of December, Cherim and his band will play a livestream broadcasted from het HEM. 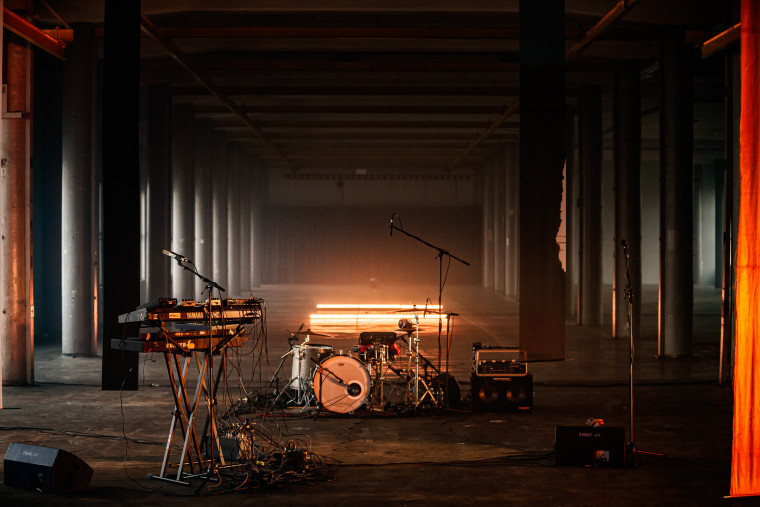 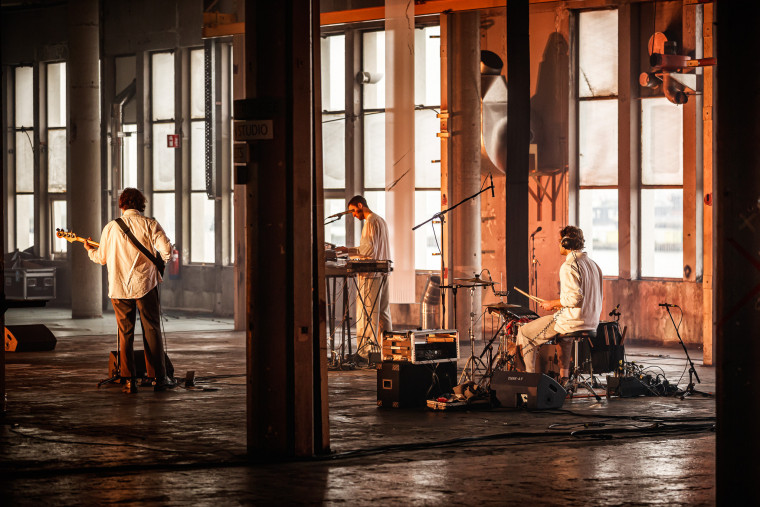 Hey Ricky, what does the Meetsysteem 'band' actually looks like?

We are a three-person team. It’s Sjoerd Bartlema on the drums and Fokke de Wit as a bass player. They both also play in another band, Global Charming. When I got a few cool bookings after my first album last year, I got in touch with them to help me out. And now, they can be heard a lot on the new album, Cr:GO. Fokke mixed and engineered everything. Besides that, you can also hear them sing and leave a voicemail on NAP.

What does the name of your album mean? And where do the abbreviations in the song titles, NAP and L.I.W.W.W., stand for precisely?

Cr:GO actually is a kind of code language. I wanted something Sci-Fi, a bit incomprehensible. For me, it stands for several things: a black mountain, a metaphor for depression that is woven throughout the album, and the desire for a brighter future.

L.I.W.W.W. comes from a dub sample where a guy sings: "Love is What the World Wants". In the end we didn't use that sample, but sang it ourselves – in Dutch. That became Liefde Is Wat de Wereld Wilt. 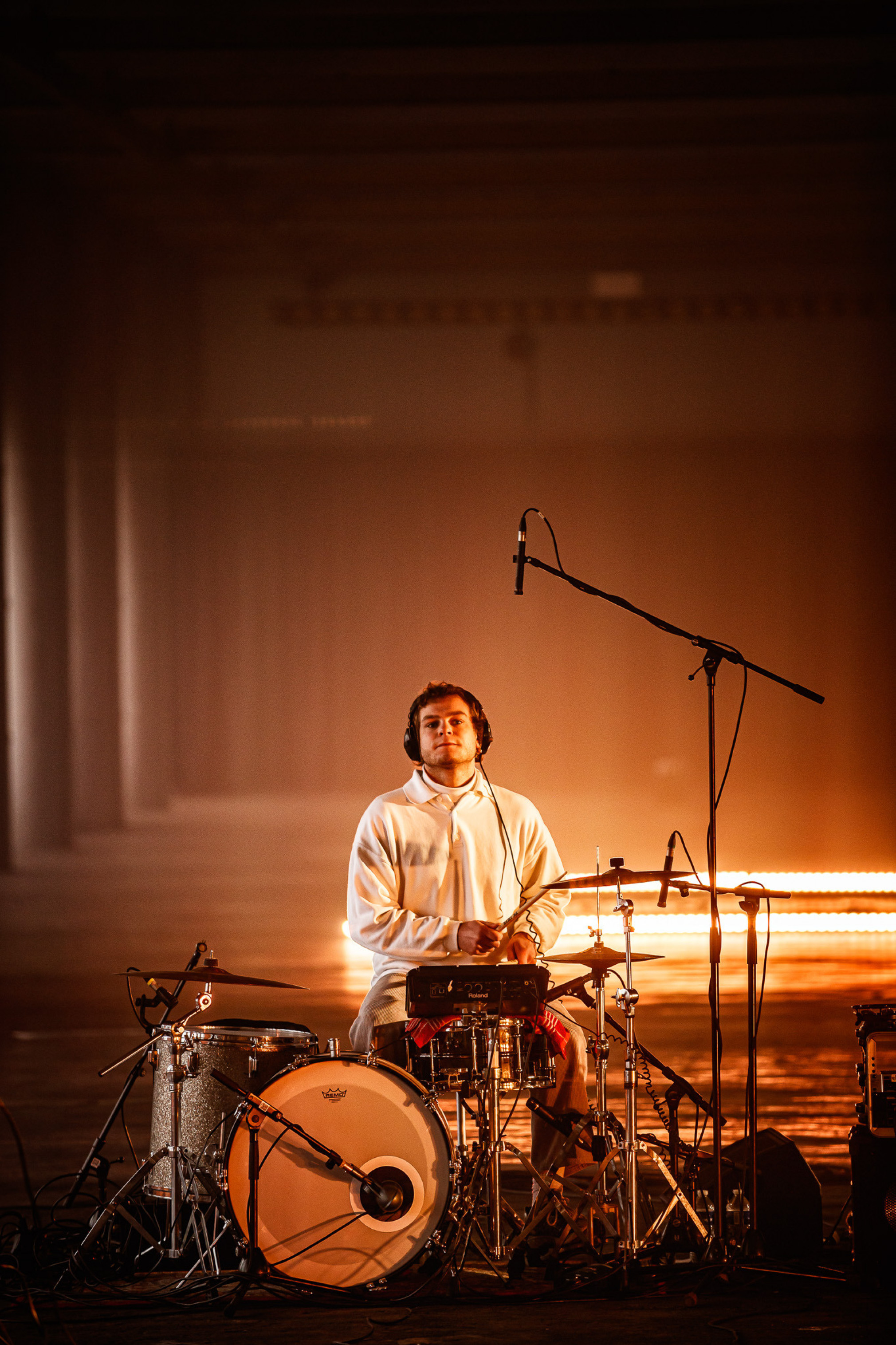 Your new album has been out for a few weeks now. How are the reactions?

Pretty good. It's exactly what I expected, yet I didn't expect it. It was harder for people to embrace as my first album. That one is much easier on the ears. This album is more difficult and less easy to get through. But gradually I notice that people are starting to think it’s cool, even if it is in a completely different way. The first reactions were immediately good last year, but now I notice that people understand it with some delay. How do you experience it?

Indeed, I also drew that comparison with your first record, which is more made to listen to in a summery dune pan. This record is a lot more intense. In addition, the Dutch lyrics in Cr:GO cannot be unheard, if you know what I mean. Even if you’re busy doing something else, once your voice starts my thoughts are focused on the songs.

That was my goal too! I wanted to broach slightly heavier topics. I read an article from a music critic who reviewed the new album and wanted another summer record, but I wasn’t mentally in the right place to make such a record. Besides that, it just wasn’t a very summery year. The reviewer wanted another record like Geen Signaal, but didn't get it. I was hyped to hear that. The message came across.

For the track L.I.W.W.W. we made ten different versions, with all kinds of different voices. In the end, we’ve just opted for this version, which is gnawing and where the tones do not quite fit together all the time. If someone finds that irritating, it’ s cool for me because I hear that irritation myself too. The electronical side is very powerful, but my voice is somewhat brittle. I really like that balance.

"This album is more difficult and less easy to get through. But gradually I notice that people are starting to think it’s cool, even if it is in a completely different way." 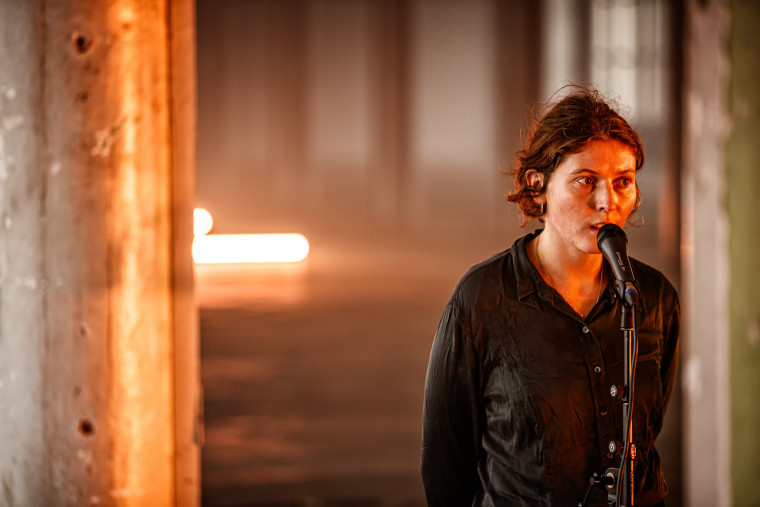 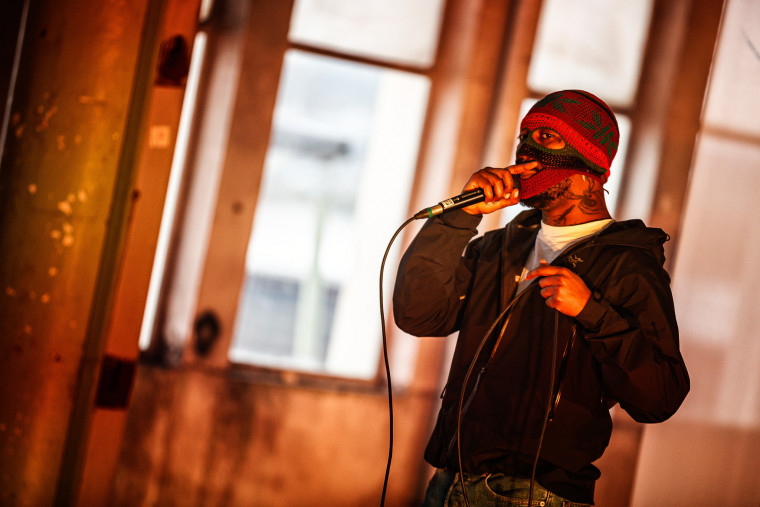 There are also many guest contributions, ranging from Gotu Jim and Ray Fuego to Gijsje Heemskerk and Oceanic? Names you wouldn’t easily think of combined on the same album.

I’ve noticed that my wide range of influences for this album have been hard to blend. For this album I was asked by Kiosk Radio from Brussels to make a mix with songs that inspired me in the process. That was a huge struggle. I listen to very commercial hip hop (a.o. by Gotu Jim, who is really sick!) but I also like very pretentious noise. The liveshows by the Dutch improviser-composer Gert-Jan Prins are a good example of that, so ferociously conceptual and cool at the same time. Combining all of that on an own pop record is what I find fun and exciting. Inviting Jim makes sense on a pop record, but Oceanic is much less obvious.

I read in an interview that climate change anxiety sometimes catches you. What is Cr: GO about thematically?

After Geen Signal in 2019 I suddenly had to perform at Lowlands and all kinds of other crazy places. That really made life a blast train. And I had already worked super hard to get that album out at all. Then I got a little bit exhausted and anxious. All the crises of the moment suddenly felt ten times more intense. In the winter I therefore went to Vinkeveen with Tammo (Hesselink, red.) and my Yamaha DX9 to make an album about the disaster and chaos that I and many others feel in this time. To me it felt like climbing a large mountain, without knowing if there is a nice little valley on the other side. Then came this year and the album mingled, almost magically, with it. 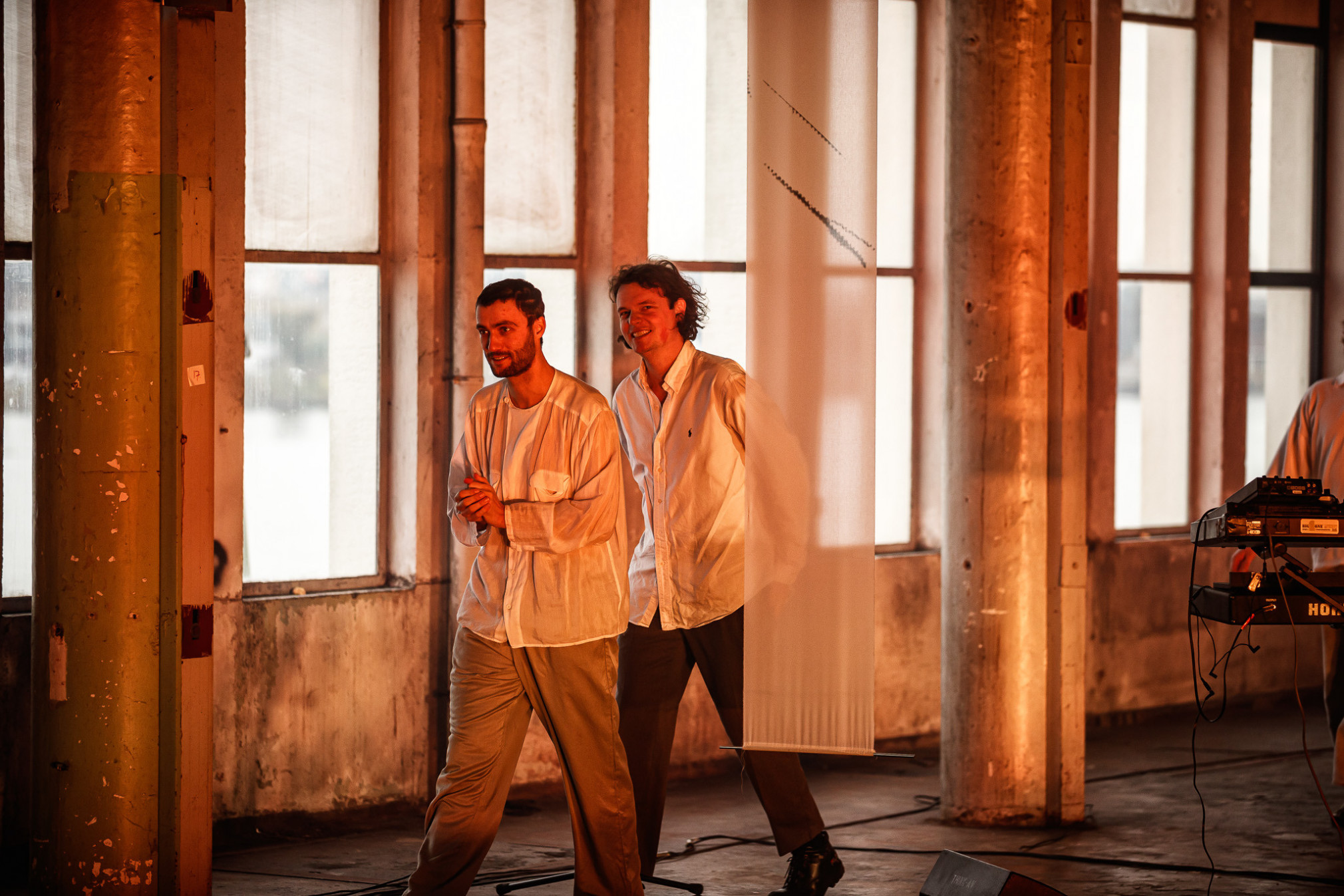 "Keeping all the music for yourself until clubs and festivals open again doesn't seem like a good idea. A person must be able to listen to new music, right? When we heard about the first lockdown, we immediately thought: “Let’s work very hard and release it this year"."

Have you had any doubts about releasing Cr: GO?

Not a single moment. Never. Release it right now, I thought. The theme of the album fits well with this moment. Keeping all the music for yourself until clubs and festivals open again doesn't seem like a good idea. A person must be able to listen to new music, right? When we heard about the first lockdown, we immediately thought: “Let’s work very hard and release it this year”.

What other artists do you look to for inspiration?

Especially to the more club-oriented friends like Tammo Hesselink and Konduku. And recently I’ve also been working a lot with Victor De Roo, a Bruxellois. He is super inspiring. He and Tammo can work very clinically and build a nice track with just some simple synth lines and drum patterns. I myself tend to add a ridiculous amount of bells and whistles, and then take things away. I also come more from the clubby background myself, but when I sent a demo pack to Sjoerd Oberman from Nous’klaer at the end of 2018, he picked out the poppy records straight away. Much was still in English at the time, but we found out that the Dutch tracks that I sent were much more expressive. Then we translated many tracks into Dutch.

Thanks a lot Ricky! To end, what can we expect at Dekmantel Connects?

A sneak peek at the live show we'll hopefully go on tour with next year, with some very special guest appearances. That will be cool! We can now play those songs live for the first time. Two artists join us: Ray Fuego and Gijsje Heemskerk. And that in the HEM, on the Hembrugterrein in Zaandam. It's going to be big!