Dekmantel | Interview How Deena Abdelwahed is Culturally…
Search Results
Your cart is empty! 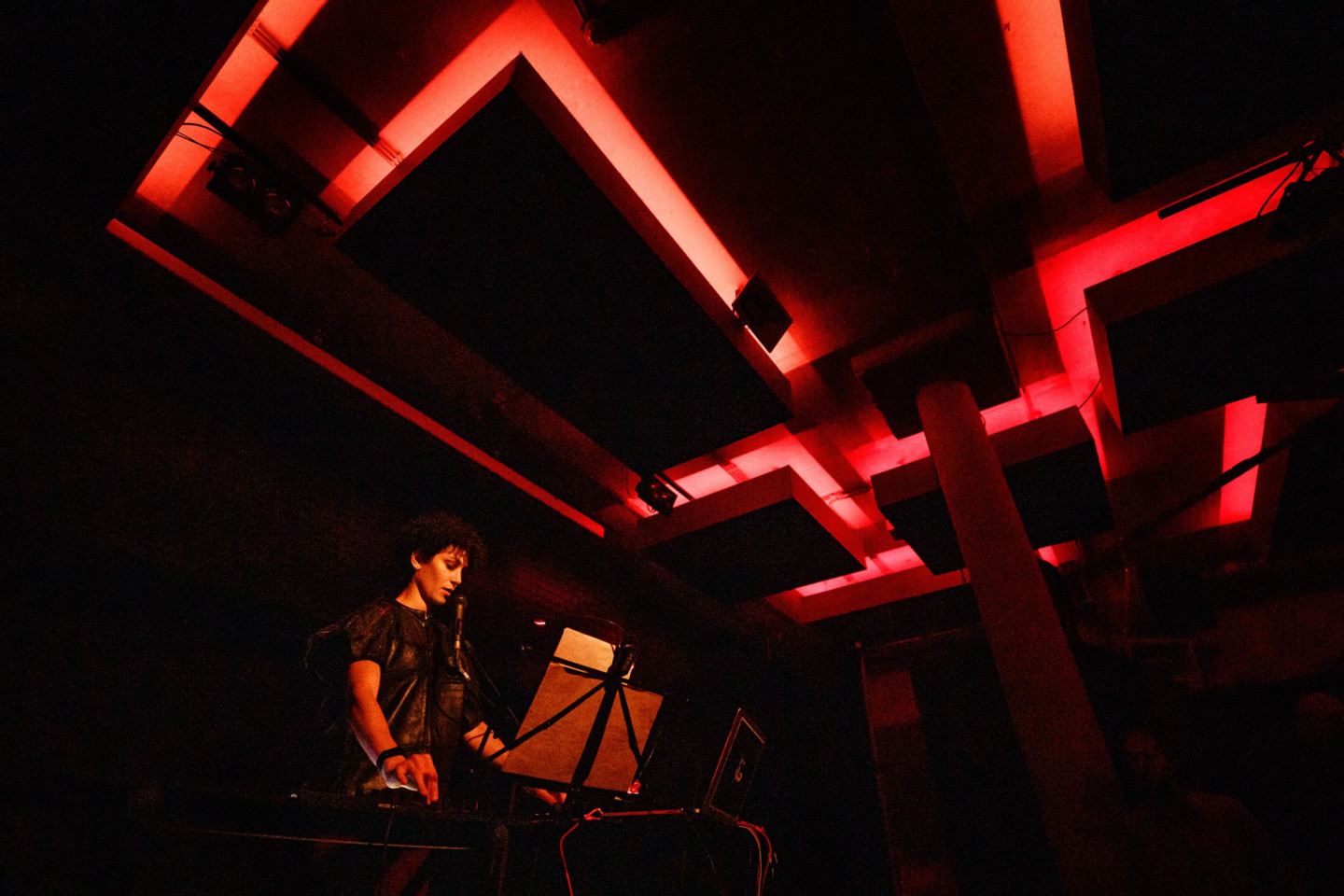 Perhaps more than any other at Dekmantel Festival 2019, Deena Abdelwahed’s performance at Shelter was remarkable in how collectively mesmerising it was.

For the uninitiated, Abdelwahed weaves the kind of club rhythms that will shudder your teeth out (in a good way) with Arab instrumentals teleported from her Tunisia-via-Doha adolescence. The latter involves what Abdelwahed refers to as a ‘re-appropriation of so-called world music’ – one that points directly toward the mightiest speaker stacks on a deep, dark dance floor.

In the case of Abdelwahed’s Khonnar live show, she brought her LP into the physical realm. From the start, even in its most stripped-back moments, the crowd was so bewitched that the entire venue undulated along to her voice alone. Later, her descents into the album’s more layered echelons summoned up full-bodied moves and happily grimacing bass faces.

As her set unfolded, the audience no longer stood facing Abdelwahed, like dance floor totem poles, but turned to both familiar and unknown faces around them, revelling in what was unfolding, and what had become one hell of a party.

The power of Abdelwahed’s music lies in this duality – it is rooted in activism and also makes you want to get your freak on – a feeling that is vital to both her live shows as well as her releases.

We caught up with Abdelwahed to find out more about the performance, her time at Dekmantel and how she transforms influences, both sonic and sociopolitiocal, from the club to the studio and back again. 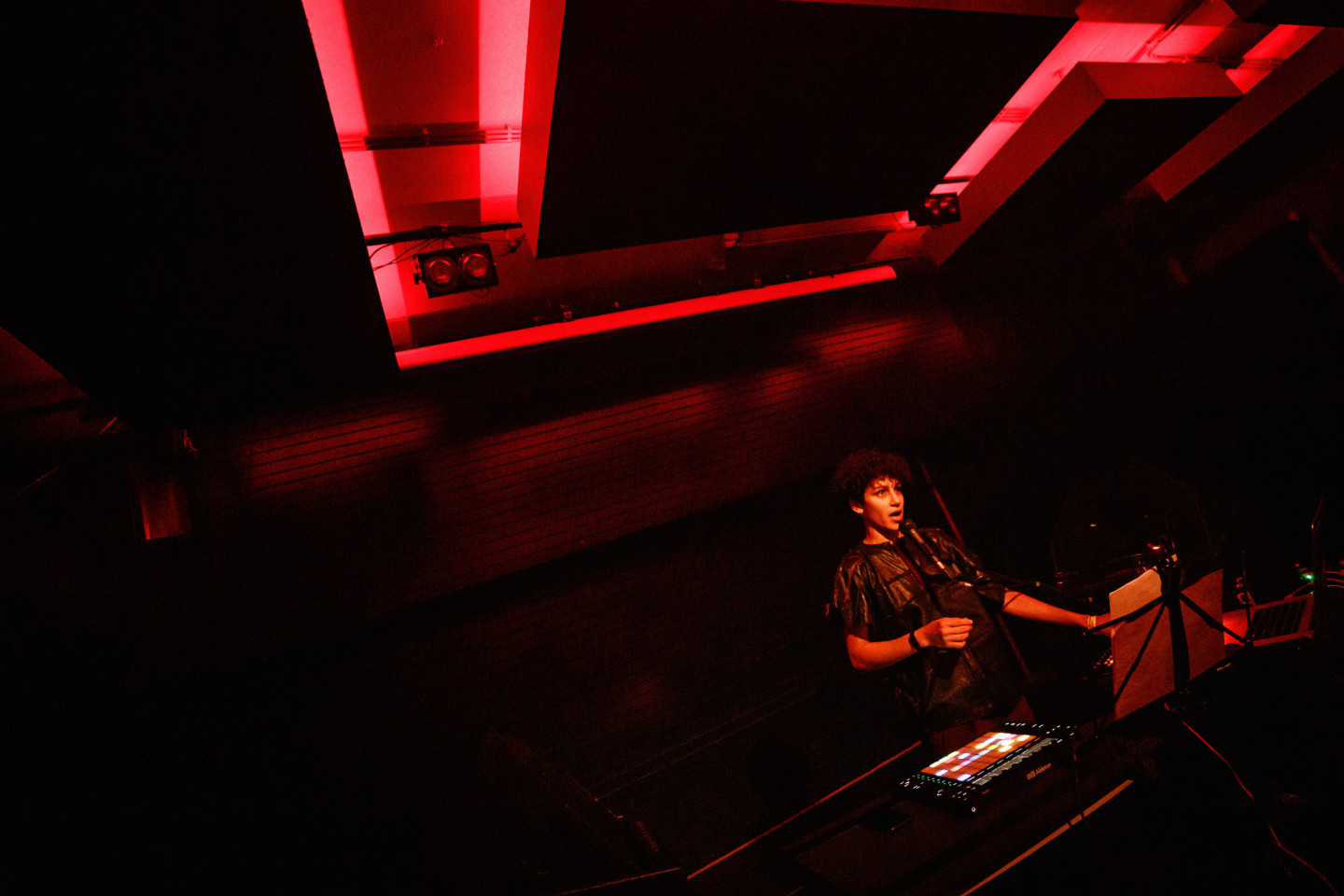 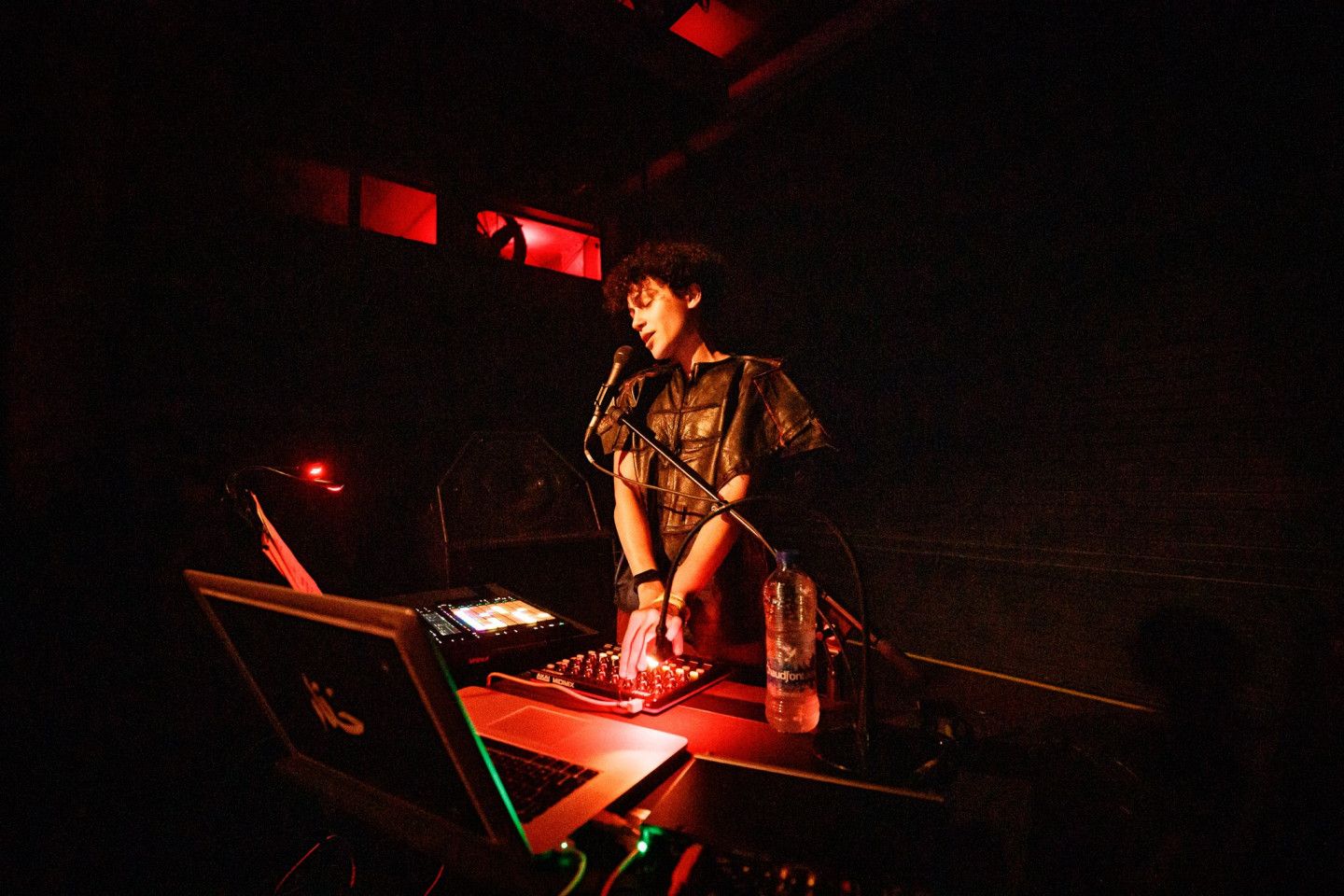 Who are you looking forward to seeing?
When I have free time at a festival, I want to put myself in a place of discovery – similar to how people who don't know me might feel when they watch me for the first time. I want to live through the process of finding a new artist who I will later grow to love.

So you don't research who's playing?
I used to be able to spend more time watching whole sets. But now, sometimes I feel like I forget how to be the public, how it feels to be on the other side of the stage. And I love watching a set from the beginning to the end if possible.

When you say you've forgotten the feeling of discovering music and artists, when did that change happen?
When I started to tour. It's not the same as going out with your friends, being easy, knowing that you went out of the house, you dressed up to forget about the world...

I stay and watch it all, but it becomes very technical, because I’m still in the mindset of when I’m performing. I start analysing it in a way. This artist did this, did that. It becomes like a football match.

When you're going out with your friends, it’s in a different mindset?
Yes.

Your face lit up in a different way as you said that.
In Tunis, where I used to live, I liked to go out with my friends so much that I didn't really care about who was playing as much as who I was with.

You hear something that moves you, and then you grab your friend excitedly, or you can see how the bass makes them react in a certain way, and it affects you too. It’s those kinds of moments that sort of ‘start’ the night, a glimmer where you look at your friends and say, "OK, let's go.” All of this is magical, and I miss it.

During your show at Dekmantel that's what it felt like being in the crowd, everyone was electrified. So while it might not feel like that when you're performing, it comes across as an audience member. Is it something you try to evoke when you're playing?
I don't try to do it intentionally when I'm performing live. But in the studio, I call it “riding a camel.” 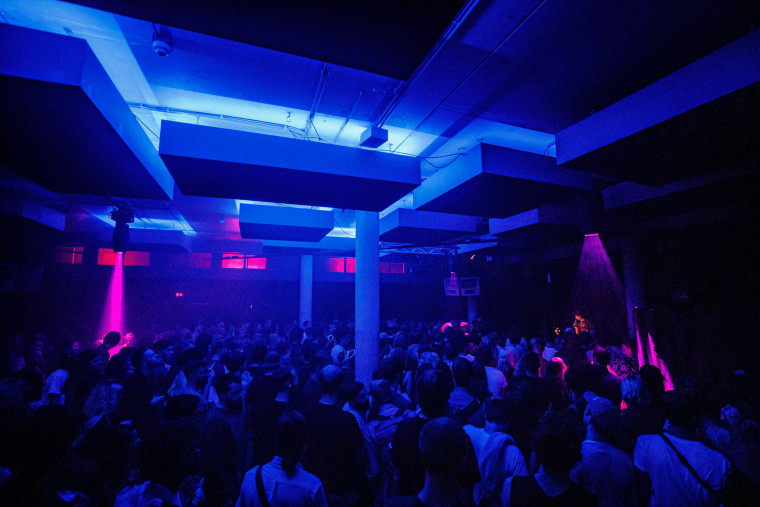 So riding the camel is the rhythmic feel that you want to have?
Exactly, but also the stability of that rhythm. It's not ambient, it's not techno, it's in-between the two. It's groovy, but it's not what people call "world music," as well. It's sophisticated.

What does “world music” even mean, though?
I was on a Dekmantel panel with Wally Badarou, and he explained it very well. “World music” is the music that comes from third world countries. Music that causes white men to react like: "Wow this is good. We need to put this in a studio!” And you give all of the performers €20, and they go in the studio, and then it goes to a white man’s label.

What I mean, musically speaking though, is that world music – music of the third world countries – is something that isn't considered club or festival music. It’s from the natural environment, or maybe a religious gathering. It's for celebrating when someone had good grades in university, weddings, stuff like that.

As a lover of clubs myself, I like to dance, I like to go out with my friends. But I also like the music we have in the Arab world, and what we listen to. So I want to blend the two atmospheres, and to culturally re-appropriate the culture that has been appropriated from us.

Is this something that’s important for you in the live sets, or does this apply to the album as well?
It's instilled in the album, but it's not very well shown, per se, because you can only experience the recording of Khonnar in left and right audio. I am not there – my presence is only electronically there, but you don't see me physically in front of you.

So what I try to do in the live set is to put all of my presence into the performance. The vocal, the laughing, my stand-up comedy routine…

What set-up did you use for your Khonnar live show?
I use a computer, soundcard, midi controller, mixer and [Ableton] Push.

Even with synthesisers in the studio, I record all of the notes, and then I put the samples into my computer. You might ask why I don’t bring the synthesiser with me. Well: One, because I don't own it; I steal from other artist friends who have it. And two, when performing Khonnar live, the most important thing for me is about the sound and my presence.

It’s not to show off how I play or perform with certain instruments or whatever. I don't want to be focused on the technicality of my live show.

It's similar to DJing – well, to how I DJ at least. Putting this particular part of the track on this particular channel, mixing into another sample, and feed through the main.

Did you use Tunisian instrumentals when making Khonnar?
Yes, in terms of samples I did a lot of research in the area since I was in Tunis anyway. What I was trying to find was a kind of Yamaha or Korg keyboard sound that is specialised for Turkish music, or that people like Omar Souleyman or Egyptian marriage troupes or Bakan groups use.

It's an oriental-style keyboard, with percussions that have a very digital feel. That's what I was also looking for. I wasn't looking to make it as 'true' as possible.

I don't take instruments that are like ‘tak tok, tak tok’ and record them just for the sake of it. I don't give a fuck, what I'm actually looking for is a kind-of one man band. That was my idea. I was inspired by the style of performance, as well

How did transform those sounds into what we hear on the album?
It’s not about the sample itself necessarily, but the placement of the sample in my sequencer in Ableton. That's what my energy goes to, that’s my intellectual process.

"I really feel like the missing link across society is partying."

At your show last night you said it's important for people to party. But you're also very vocal about speaking against homophobia and championing LGBTQ rights, for example. How do you combine these two elements when you’re making music?
The reason why I learned and self-taught myself to make music was initially because of political reasons and motivations. Because what I saw in Tunisia, and in the Arab world in general, is that only certain types of people – the super rich and elite – have the privilege to party.

I didn’t come from a privileged background, I was somewhere in the middle. Then I decided to go to Fine Arts school, even though my parents weren’t happy about it. Not everyone has the persistence or the courage that I had. I really feel like the missing link across society is partying.

What do you mean by partying?
The ability and freedom for anyone, regardless of their background, to go out, hear music, dance, and let themselves go. You see this during the summertime. People are so desperate to go out that they just invite themselves to the marriages of other people in the neighbourhood. Just to go to the celebrations and dance! They don't even dress up... 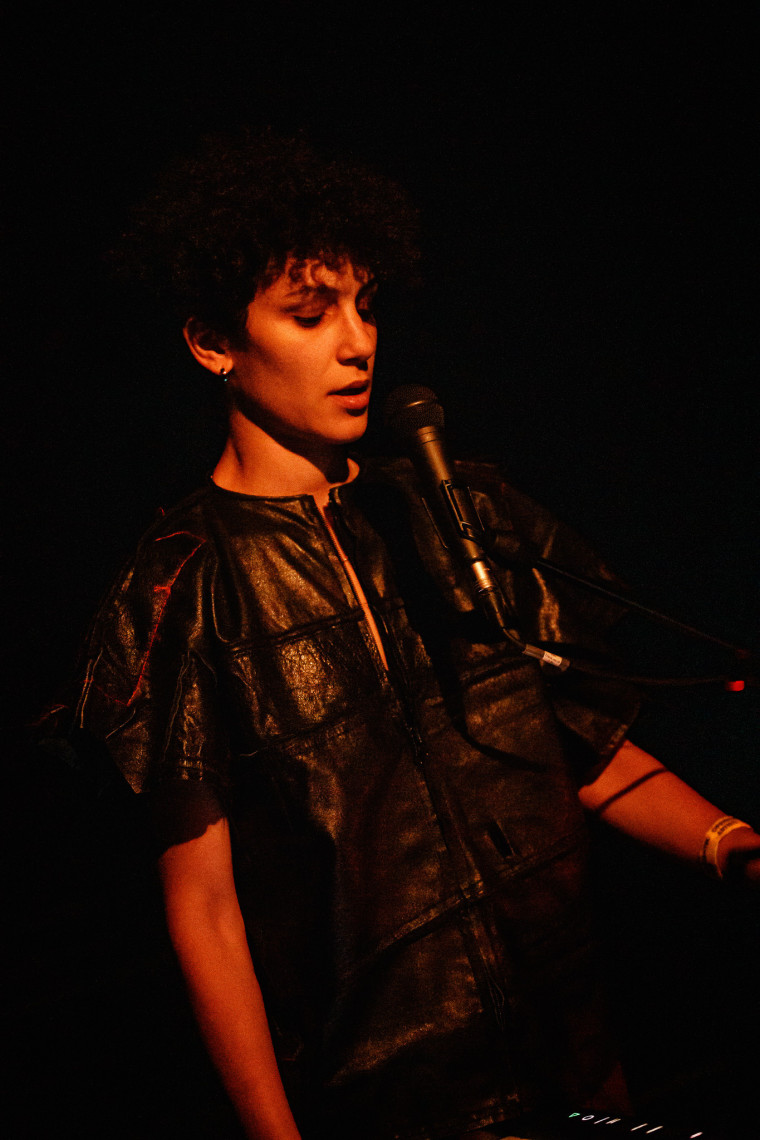 People crash weddings just to have a dance. Why do you think this is the case?
It seems like there’s an ignorance, and a sort of inability, to take in what exists in Europe – the idea of creating an event with a great sound system and DJs. That format is still relatively new to the Arab world, or even parts of what would be considered third world societies.

When club culture came to the third world it became something privileged. These people certainly don’t know where its origins came from – that raves in New York began with gay and minority scenes that would ‘go to hell’ for what they were doing, for example.

The problem is that these two entities have become so separate. Life is too short to be divided.