Dekmantel | Interview In conversation with John Talabot
Search Results
Your cart is empty! 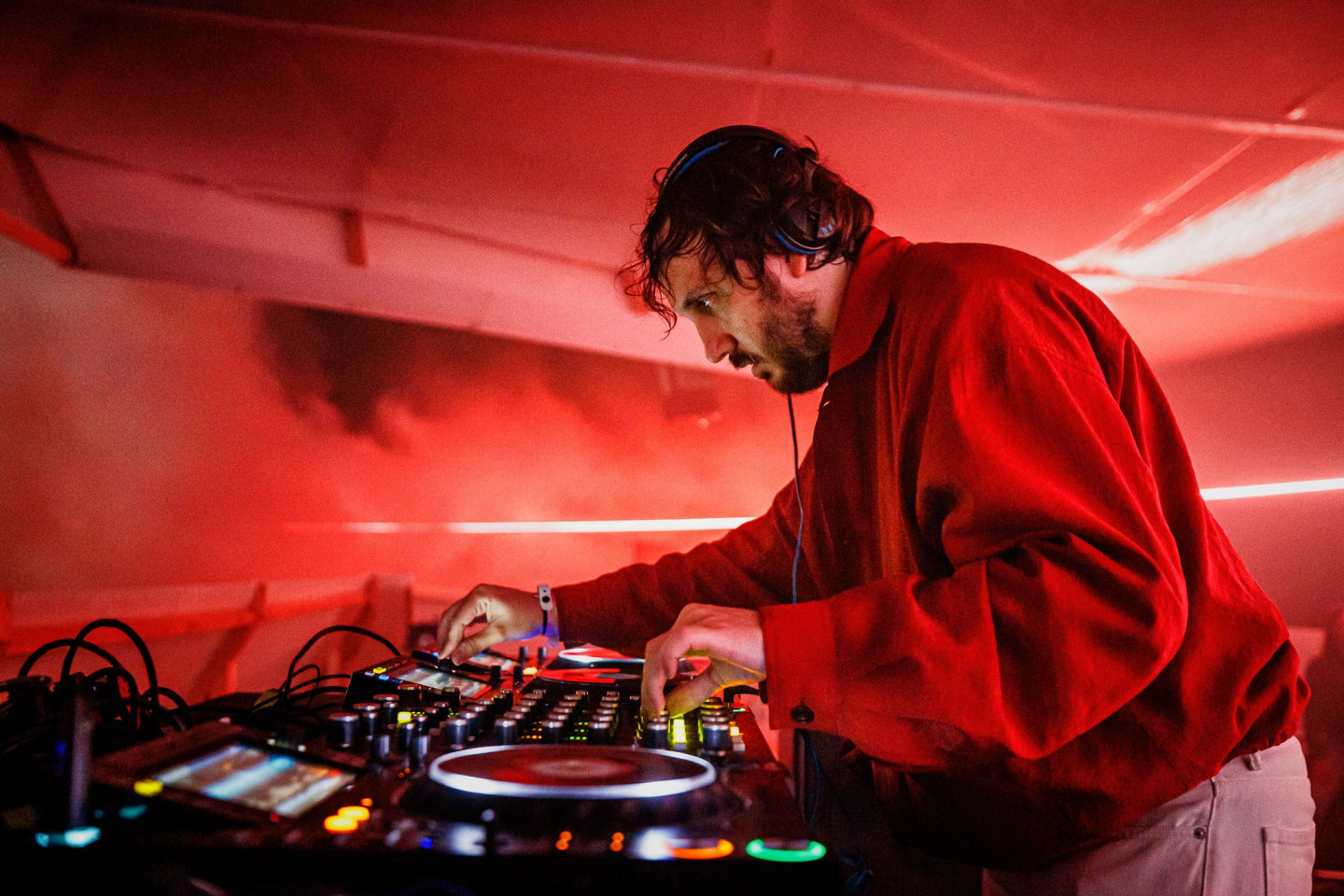 Interview
In conversation with John Talabot

After dark, Dekmantel’s mainstage is transformed. From a bouncy suntrap and a space to bask in the sound and general ambience of the Amsterdamse Bos, it becomes an overload of light and colour, it’s concave screen beaming across the hoards baying for one last blast before heading out into the night. Clambering from the booth atop this monolith is where we find John Talabot, himself beaming after drawing Saturday to a climactic peak.

Naturally he needs some time to come down, so we leave him to take a breather in a nearby cabin, while we reflect on a figure who has become a lasting synonym for cosmic expressiveness and stylistic flights of fancy. Singles are often sharp (Flordance) or hypnotic (Immediate Crash Alert) or both (Voices), whereas his albums tread softer, more textured ground as on his crossover debut fin. He’s also a serial collaborator, most notably scoring another record that tickled the mainstream’s attention with The Night Land as Talaboman (along with Axel Boman). The only given seems to be a state of flux.

His history with Dekmantel goes back to the very beginning, playing at the festival’s first iteration. Back once again after appearing practically every year, we thought it as good a time as any to try and pin down something constant, and find out what drives him to keep exploring. 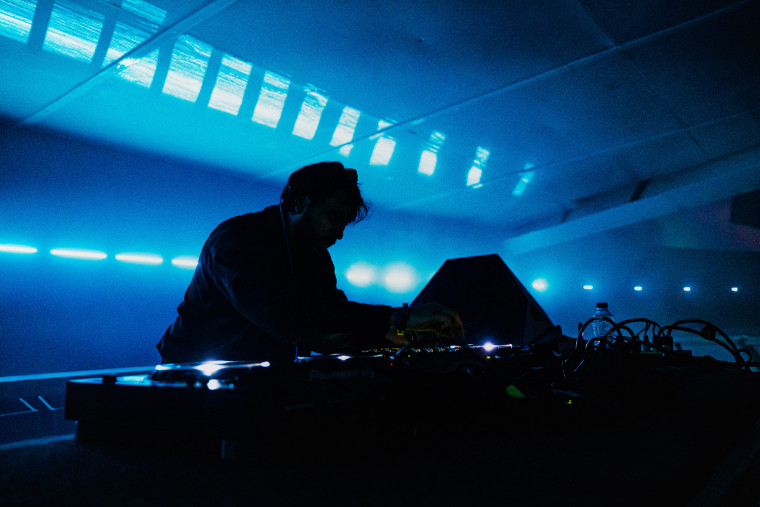 You’ve been a mainstay here since the first festival. What's your relationship with Dekmantel like?
I remember perfectly the day that Thomas told me about the festival, we were together in a car and he told me about this idea that he had. New acts mixed with classics, upcoming people from Amsterdam and the country. I thought it was a great idea. They were doing parties for some years before but it's crazy how the festival has exploded. It's a bit like a diaspora. It helps the local scene a lot, and they try to stay aware of it. And it also links really well with the history of music, having people that are sometimes forgotten but started everything. They make this effort to bring people that have been there fighting for a club scene, for a healthy community. It's important they are in the consciousness.

Someone like Leroy Burgess for example?
Yeah, a lot of the acts aren't that well known but invented a lot of things. Without them we wouldn't have any of this.

Do you feel like with your own work, you see yourself as fitting into that timeline?
No because... Look, I have so much respect for so many of the artists that I can’t see myself at that level. I've been lucky that I've been in a moment, that I've been able to live from making music - but most of these people who started it, they couldn't. Not until they were fifteen years into their career. It's great that people are getting to know a lot of these acts now but it feels a bit sad also. These people should be in the books, you know?

"A lot of the acts aren't that well known but invented a lot of things. Without them we wouldn't have any of this."

Put another way, do you feel like you have a clear idea of the lineage of artists and scenes that led up to you making your music.
Yeah I do... But I've been doing this for quite a long time now, and you see things coming and going but at the end the best thing is to not think about it too much, just live it and enjoy it. You know if you're too aware of everything else around you then you can't live it peacefully and fully. That said, what’s great about these festivals is to see what I discover.

What have you seen this time that you’ve really enjoyed?
Well I really liked John T Gast at Shelter. That was crazy. That label (5 Gate Temple) is amazing too, that whole 'don't give a shit' vibe. One thing is really techno and another something totally different. The show was great as well, loads of smoke, really dubby. It connects really well with the past of the UK electronic scene I think: dub, rave, techno, electronica. It's super compact.

With the set tonight, have you ever headlined this stage before?
No, I've played on this stage twice before but not closing. I played some slots in the middle and I played with Axel once.

So because you were closing it today, did you approach it differently to the way you might if you weren't?
I did a completely different set to every other time I've played here. This time I played a lot of older American records, a lot of acid stuff, maybe a bit more ravey. But also really intense. I'm not sure if people were a bit overwhelmed, but it was fun. It's the only stage where you're quite far away from the crowd so it's hard to play. I really don't know how it went.

I'm a really open person and I buy a lot of different stuff. For me, with music there is a lot of open space and I like to discover new things and try them out. Doing these kinds of sets is really cool because I can play really differently. Last year I was playing in the greenhouse and it was super trippy, whereas today I started out much faster.

Do you feel like the different vibes of the stages make it easier to do this?
Yeah, you see people doing really different things than normal. I think DJs really enjoy that because a lot of the time you get booked for what people have already heard, so it’s nice to break that rule and think: ‘I'm going to something completely different,’ and it's not a problem.

"Everything is about exploring, your growth brings you to new things."

Being such an open personality, and having been making music for a long time over many styles with many collaborators, do you feel like there's an underlying voice that is essentially you?
Yeah I think I have it, but then as John Talabot I don't release that often. For me, John Talabot is an entity to be presented on stage but I have different many different projects attached to it. Often they have nothing to do with each other. I think when you analyse the last few years you'll see there's a bit of recurrence but my favourite musicians have been involved in many different projects. I love going and checking out pop albums they might have produced and then a techno record they might have made, or super experimental stuff. Everything is about exploring, your growth brings you to new things. But then I think I have some personality with melodies and drums and stuff that’s always there.

So are you looking to make a pop record yourself?
Yeah! I have something coming up that's quite pop.

A John Talabot solo record?
Yes. I've been working on it intermittently and now it's almost done. I'm really happy because it's been a long time but, at the end, if you put together the time actually worked on it it's not that long. It's just been little sparks of work and inspiration. But I like to do different things. I really like to do collaborations: it brings a lot of life working with people and not being alone in a studio. 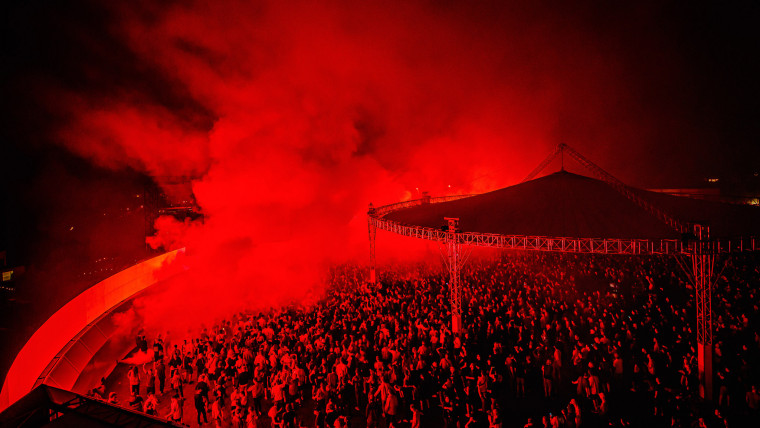 You've done a lot of collaborations. Is that more for the fun of it or do you find ideas flow more easily?
Yeah I mean I like to do projects that have nothing to do with what I've done before but they need to come naturally. It needs to come from a special moment from meeting someone or feeling like it's something I need to do. There's no plan.

So if we use Talaboman as an example, how does that work?
It's really fun to work with Axel because we just record and then edit later. When I work alone I'm a bit more ordered whereas with Axel there was this objective of not saying no to anything. That project has that sense [of spontaneity]. More recently I've been working with another friend, playing with some modular gear and yeah, it gives me a lot of life. When you travel on your own as well you want to have someone in the studio with you.

I suppose there are a lot of lonely periods when you travel that much alone?
Sure but I like to enjoy those solitary moments. I need to go home a lot but at the end for me travelling and playing on the weekends becomes a kind of… [he exhales] moment. In Barcelona I'm always busy so there's always this fight between work, life, play, search music, produce - that is really difficult to make work. You feel like you're constantly juggling and something is bound to fall.

So going and doing gigs is like a nice break?
For me, yes. And it's really inspiring being surrounded by music all the time. At the same time you need that break. You get into working on something and then on Thursday you need to start preparing music etc. One thing I love about playing is that it makes you super receptive to music: always searching, always record shopping, I love that. That's what gives me the energy in my work.

Do you have any favourite shops?
In Barcelona I always go to Discos Paradiso, they are my friends and... I spend too much time there.

That brings us onto the label that you own, Hivern.
The label was another thing that took me a long time to do, to take care over. It took a lot of energy - sometimes away from doing music because we are really involved in choosing the tracks. In the last few years we've released around 10 albums.

It's a really strong catalogue. Again there’s a thread but maybe not a particular sound.
With the label I stopped thinking about what we should release, and just pick the things I like. I realised that my favourite labels were somehow a work of documentation. I'm really proud that we’ve released artists we are connected with from all over, but especially locals who are just starting, who sent us their first tracks.

When you say documentation do you mean the documentation of your journey in music, and who you've met along the way?
Yeah, and who we've met through the label. That's the thing - as a label you start releasing an artist and you really like their first music, and then they decide to go in another direction and you might not release anything [else] from them, but some of my favourite records have been released on a label where that artist has only released one thing and they're gone. I like being able to document that.

Definitely. We loved that split-release you did with Khidja recently by the way.
Yeah, that's something we do. Often people feel the need to put out a four or five track EP, but these split records are cool because there’s no stress to get more tracks. Sometimes, if it’s nice to play, one is enough.