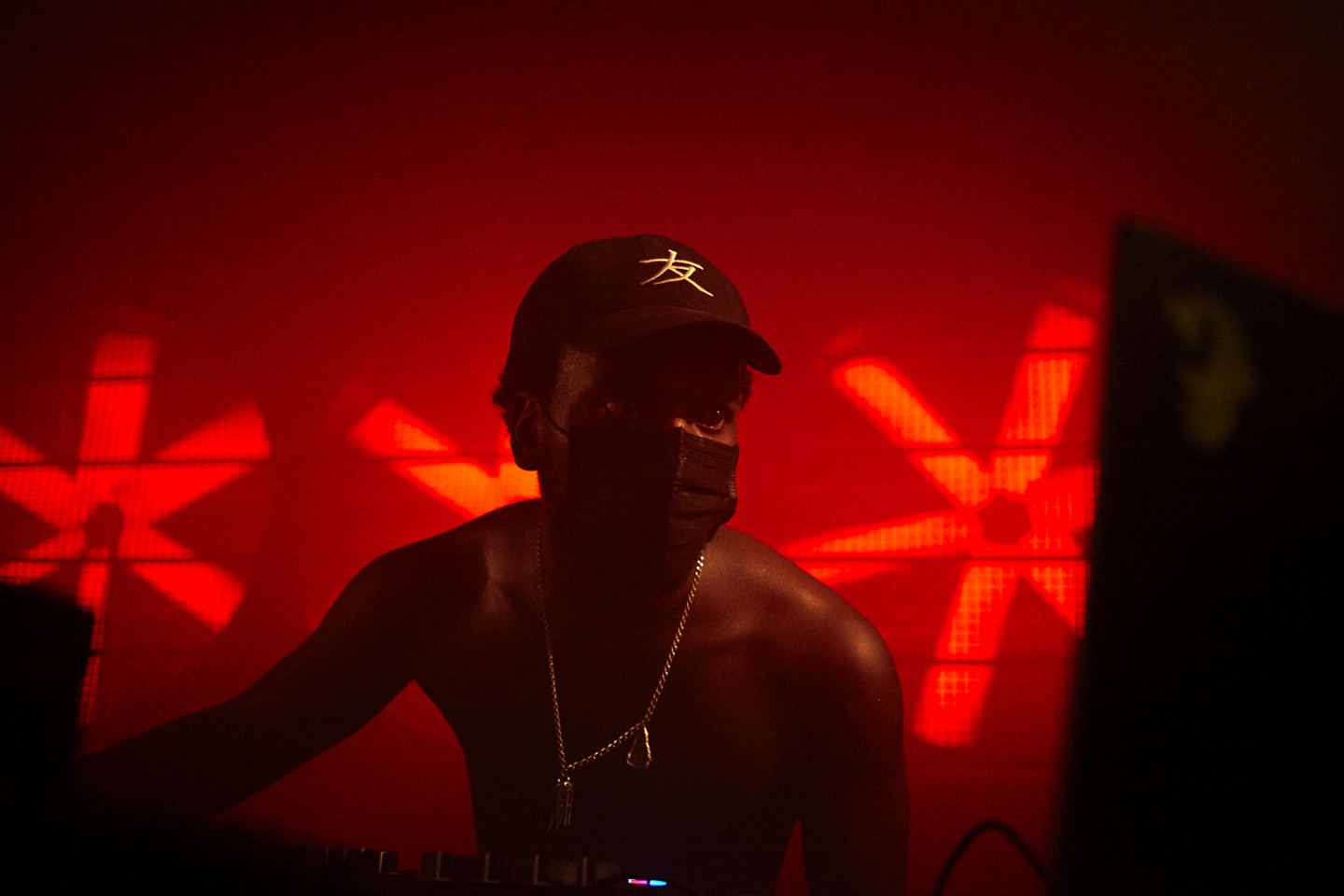 Over the past two years, Kenyan-producer Slikback, aka Freddy Njau, has transcended from making tunes at Boutiq Studios in Kampala to sharing his gleefully genre-swerving sounds around the world.

Rather than feeling derivative, what is most exciting about both his Lasakaneku and Tomo EPs is how distinctly ‘Slikback’ they sound. Mixing influences ranging from techno, gqom and trap to soundscapes, deconstructed electronics and traditional pan-African percussions, the tracks, and his DJ sets, can most succinctly be described as fierce.

Speak to Njau though, and what continually comes across is how effusive and warm he is. Rather than being precious or overly serious about the bass-heavy shapeshifters he produces and plays, there is a vibrancy in his creativity.

On the heels of his stellar first appearance at Dekmantel Festival, Njau delves into how he finds freedom in the darkness of a club – channelling moods and colours into visions via the dance floor. 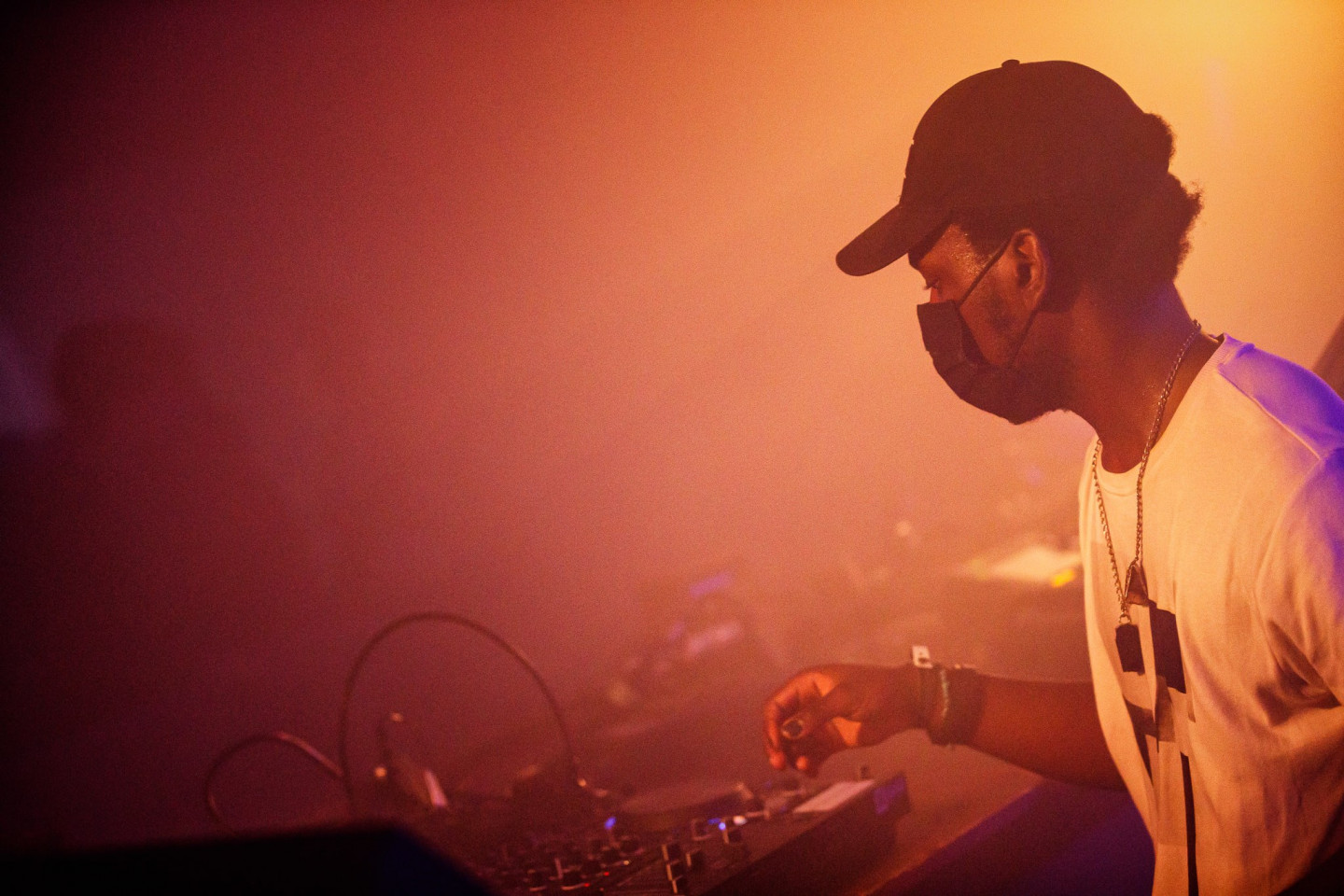 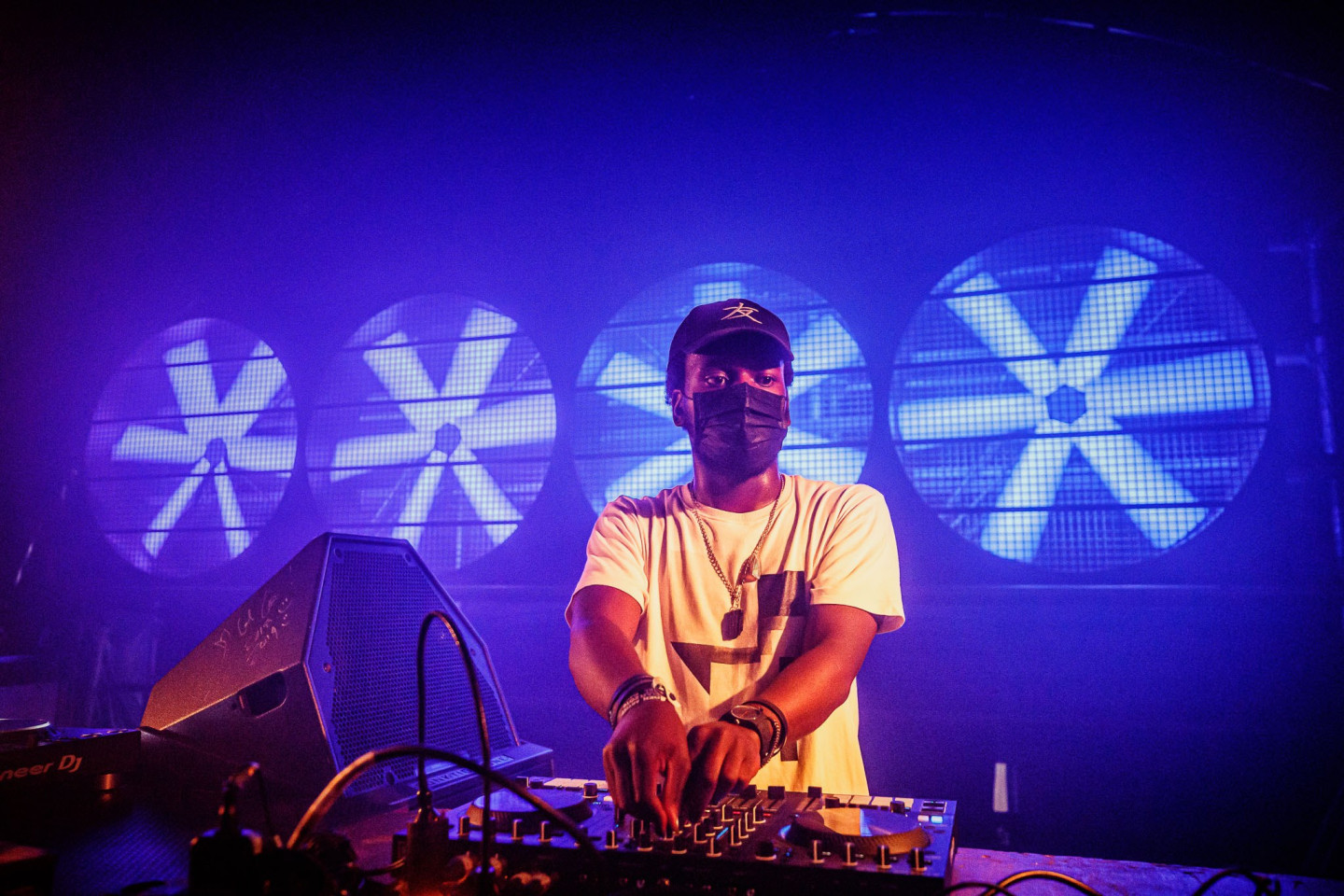 At Dekmantel, you played two sets, very closely together – one at Boiler Room and the second at UFO II stage. Did you prepare in advance?
Only for Boiler Room, because I'd seen the space online already. For there I selected some tracks from my friends, edits and stuff I’d been listening to every day. What I end up playing in all of my sets is usually music that I love and know. I just want to experiment live, and hear how it sounds when it's played with another completely different sound. At the UFO II stage I played a harder set though.

When you say harder, do you mean the speed?
The mood of the set – it was a bit darker.

Do you change the mood based on what the space is like?
My sets completely depend on the space. Sometimes I play in a park, and the next time I'm in a club. When I'm in a park there are families around, so I can't play things that are loud, and noisy, and might hurt their ears. When I'm playing in a club, or indoors, or a place where people are smoking and it's dark and there are strobe lights, I can go in a different direction. I always try to play music that's melodic, with sections that have space for people to breathe, but I also like to go much darker when I'm in interior spaces. I feel more free when I'm indoors. Outdoors it's bright and it's very different vibe.

"Moods like emptiness don't have a colour, so sometimes my sets focus on that feeling."

You find freedom in the darkness?
Yes, exactly. No one is really looking at me, especially when there's no light on the DJ booth. People are paying attention to their partners, or friends or some people are alone drinking. They're kind of in their own worlds, not really paying attention to what's happening around them. And they kind of listen in a different way. That gives me the ability to go a bit 'redder', a bit louder, a bit darker.

When you describe your sets you mention colours. Is this something you associate with music?
Yes. Although sometimes it's not exactly a colour, sometimes it's the absence of colour. There's a beauty in that lack of colour too. For example, moods like emptiness don't have a colour, so sometimes my sets focus on that feeling. Other times, I focus more on happy vibes – mostly when I play in Uganda, where people have a bubbly style of dancing. Some places are a bit depressing, so I end up playing things that are more colourless. At Dekmantel, it was more of a pastel, with a mixture of colours for Boiler Room. In the UFO II, there's a photo that perfectly captured the mood – it’s a red image [see header photo]. That encapsulated everything that was happening, and how I was feeling, really. 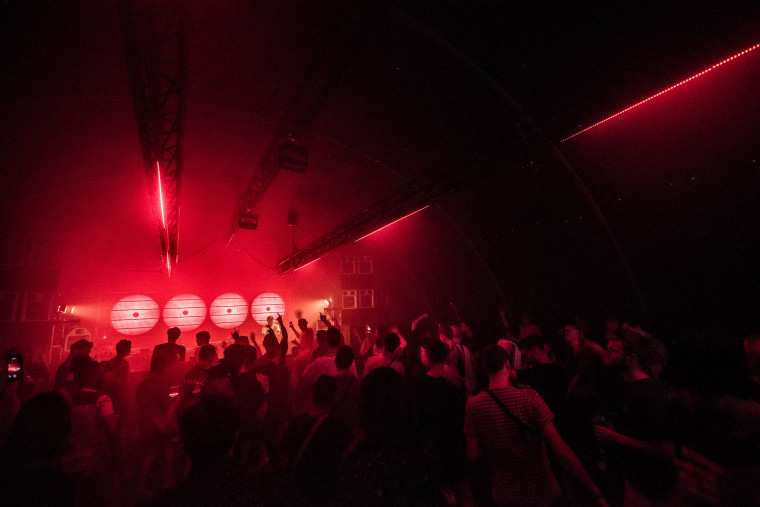 UFO II is the steamiest bunker of amazing electronics.
I really enjoyed that second set. I like Boiler Room for what they're doing – not many people can hear my sets, so putting a mix online or being recorded for BR helps for exposure. But, being on camera and online is something that I am less comfortable with than when it’s just darkness, and everyone is in their own vibe. The UFO II space is great.

How do you prepare for your sets?
I usually have different folders with the tracks I might want to play – edits, remixes and my own music – but I never know what I'm going to do with it all. When I get to the venue, I'll feel out the vibe of it, and that gives me an idea of where to begin and where to end. I don't practice much specifically before each set, but I do have a general idea of where I'd like to go, regardless of where I'm playing. I want people to feel something, but I also want them to dance hard. I'm always trying to find the right balance between the two.

Is this a feeling that you cultivated from going to clubs and festivals when you were younger?
No. Growing up, my life was mainly focused on school and church when I was a kid. But at some point I got really into EDM as a teenager. Hearing it played on the radio for the first time, I thought, "Whoa, what is this?!" Then my cousin showed me more music, and when I got into university I started producing as an escape.

I began with more straight-forward style EDM, hip-hop and trap. But because I couldn't produce as well, or didn't even know how to mix, it ended up sounding quite different and raw. Sometimes, I didn't even know I was meant to lower the levels on kicks, EQs, stuff like that. I was just putting things in at the same levels. I played the early tracks I made for friends at university, and they thought it was interesting and wanted me to go show other people what I was doing. So they took me out to a club, and I met the Nyege Nyege crew.

I didn't think anybody would like it because it was very rough to listen to, especially the early tracks. But they said, "This is great! You should listen to this and this and this..." – and it all spiralled from there really. They started showing me bigger names in the more experimental scene – like Jlin and Tzusing. It blew my mind to hear such freedom in production and music.

"Meanwhile, everyone else has a reaction like, "Whaaaat Fruity Loops, why are you using that?!" We’re stuck with it.﻿"

Did hearing these artists change the way you make music?
Absolutely. I decided to produce tracks that sound like who I am, and what I feel inside – that's what I always try to put that into my music now. I don't focus on the commercial aspect of the industry, of selling my beats to a rapper or something like that. I feel more free with just making whatever I think sounds cool to me. By doing that, eventually my EP, Lasakaneku, came out. Last year I played Unsound Festival, and this year I started touring a lot, released my second EP, Tomo, and eventually played Dekmantel. It was a weird progression for me. I didn’t expect for people to appreciate what I'm doing. It's amazing to see all the support.

What do you use to make your tracks?
I still use Fruity Loops – the exact same version as when I started. It was very hard to get into it, initially, because the software isn't as intuitive as Ableton, which I learned after the fact. But, Fruity Loops was super easy for me to get through my friends. I also noticed that a lot of trap producers used the programme, which attracted me to it. When I started getting into more avant-garde styles, I noticed that producers all used Ableton and very few people used Fruity Loops. It's almost like a 'secret society' with us, in a way. Meanwhile, everyone else has a reaction like, "Whaaaat Fruity Loops, why are you using that?!" We’re stuck with it. 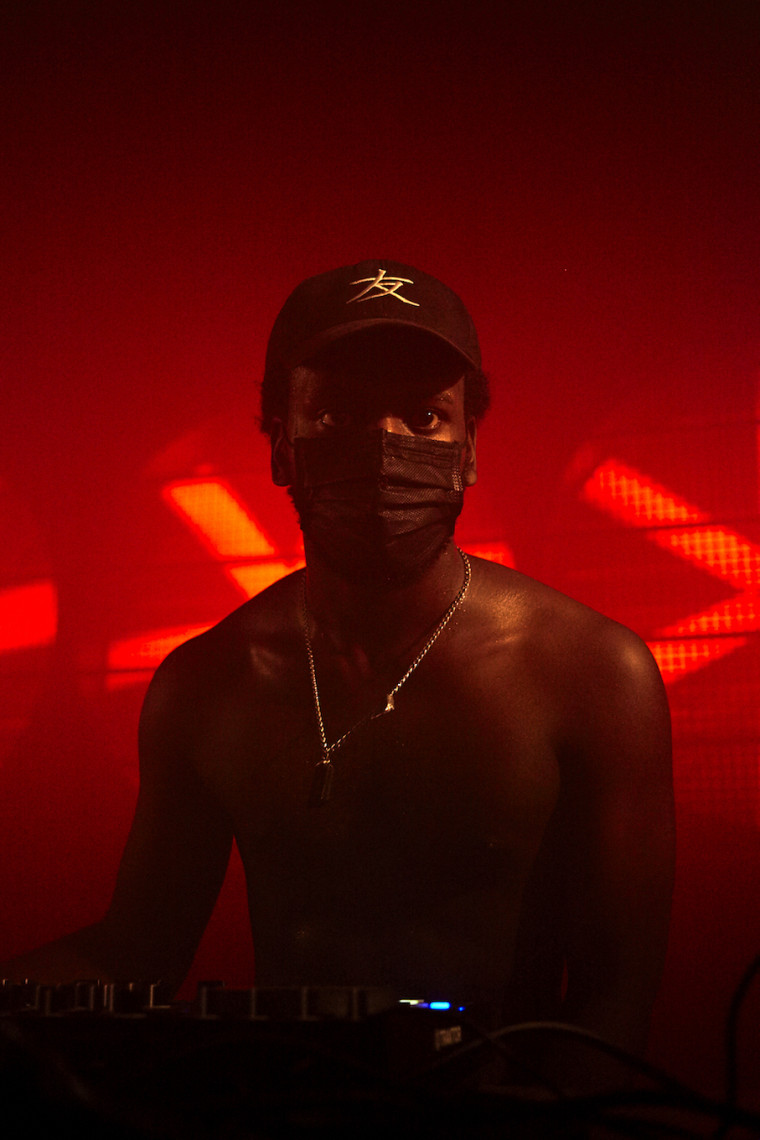 Listening to your music, it seems like you move fluidly between different genres and styles, to the point where people describing your sound use so many different adjectives to try and explain it. Perhaps that means it’s singular to you. Where do you draw your inspiration from?
I listen to a lot of different styles of music, so I end up getting ideas from all kinds of places. For example: the bass in trap music, the kicks in gqom, the weird synths in techno. When I'm trying to make something, I pull from different things I like. Even traditional Kenyan and Ugandan drums are incorporated into my tracks.

How people describe my music is very humbling. I feel like people understand it more than even I do. Maybe this is because... sometimes, I don't fully get what they're saying about my music… [He laughs] But, if people see something in it that I can't see, maybe that's what it is too. It reminds me of an essay I read called The Death Of The Author. Once someone creates something, it's not up to him or her to interpret what that creation means. When it's out in the world, it's like it's dead to the creator, and everyone else is able to say what they think it should be. Music is like that as well. People hear and interpret things differently, but at the core of it all, they get it roughly correct, and sometimes they see things that even the producers don't see.

Do you want people to have that kind of freedom when they listen to your music? To feel however they want to feel and respond however they want to respond?
Totally. If someone feels like my sound is depressing – if it speaks to their depression – that's fine, if that's what helps someone when they're in a certain mood. Some people call my music African club or future club, and that's fine too. As long as people are listening and paying attention, I don't mind how they put their own spin on it.