Dekmantel | Behind The Record: Dazion
Search Results
Your cart is empty! 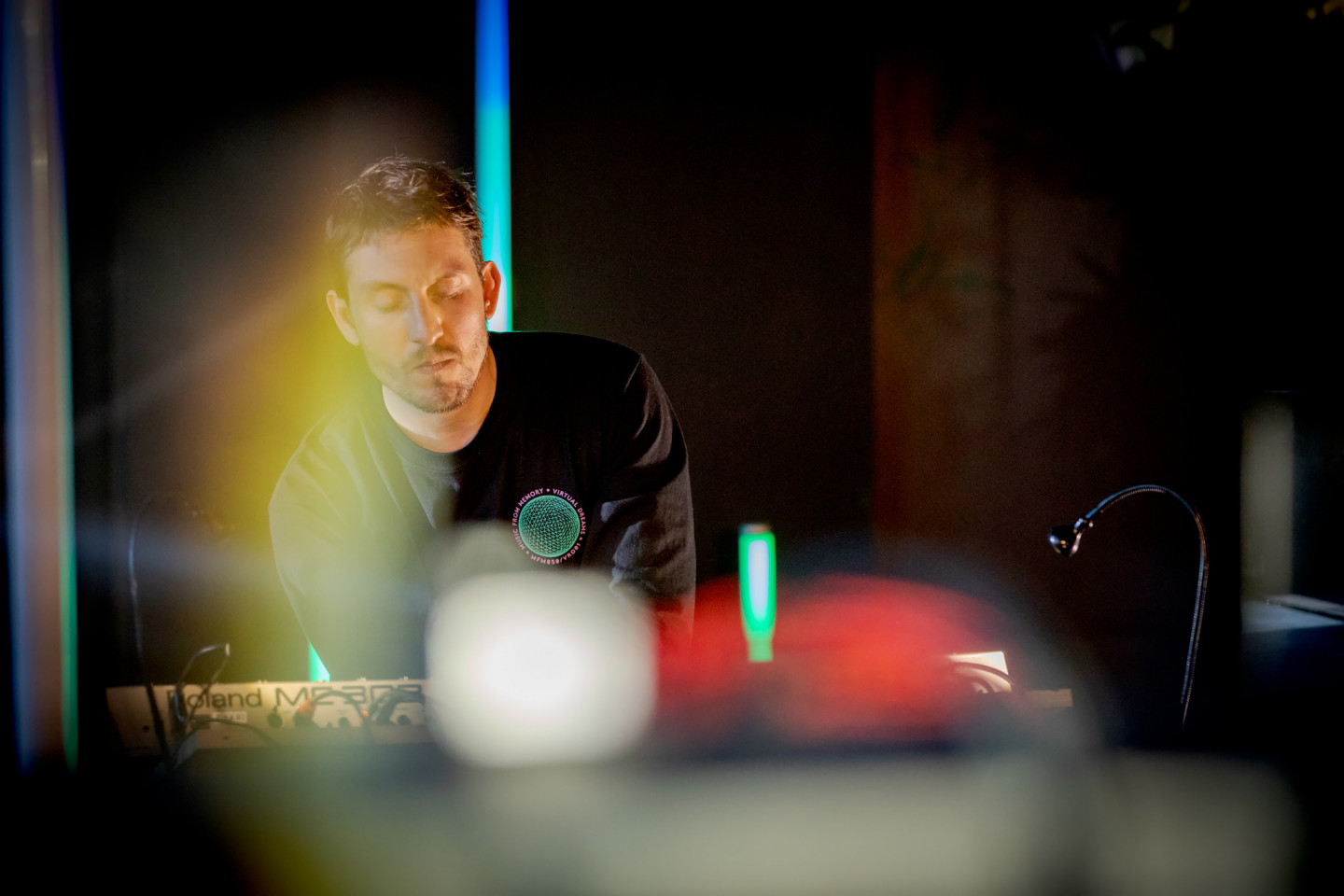 In between Dazion’s Dekmantel Festival performance and his Dekmantel Selectors DJ-set we had a chat with Cris Kuhlen about his new album ‘Grooveboxxx’, his everlasting connection with The Hague’s club scene and his fascination with vintage hardware.

How did your love for music emerge, and how was The Hague involved in this?

I was born and raised in The Hague, but for a while I lived in Rijswijk. My street in Rijswijk was a mostly quiet street with a chestnut tree, easy going neighbors and beautiful flowers. All the children were playing outside, and every door was open. Sometimes on Friday’s we were invited to a garden party, in the evenings the guitars appeared. It was like my house at the time, filled with guitars. My parents loved music, it was always around. My time in Rijswijk and the musical surroundings there, left a sweet, warm spot in my ears.

When I was 18 I moved back to The Hague, a city that is now often known for bands and Indie Rock. Some may call it ‘Rock city number one’. What one might forget is the rich electronic music history that found its space in numerous clubs filled with tribal, mellow, chains, fluffy boots, crop tops, mesh and dancers. It was hedonistic, crazy at best. House music was screaming The Hague.

This golden coin had a much rustier flip side. Amongst all the fluffy boots, nightlife in general had the occasional brawl or fight. It didn't sit well with the city council or politicians for that matter. I remember this stereotypical club owner I once worked for. Golden chains, a mega temper! Even the bouncers were intimidated by him. I remember getting decked to the floor, because of 'fireworks' outside. Which turned out to be some idiot shooting at the door. You know, at one point, the whole club industry was like a balloon ready to explode. It even got to a point that 'club' or 'house parties' got a bad reputation. The National Queen's night celebration even had a ban on 'electronic music' at one moment. It was really freaky, but electronic music stages were not allowed anymore in the city. Luckily, things picked up again, but I vividly remember those days.

The Hague’s electronic music history is rich, but also unfortunate, what about the, The Hague club culture nowadays, you played a lot at PIP The Hague?

It was and is very difficult to start nightclubs in The Hague. Many people tried, but it resulted in next to nothing. However, new people are employed in the local government, and ways to create space for club initiatives changed. Nowadays, many young and creative people start initiatives, with a broader scope than just organizing a rave in a squatted building, just to get fucked up. This still happens here and there tho, and it will, it’s in The Hague’s party culture. Party initiators learned themselves to keep proper contact with the local government. They think of different concepts, by focusing on community and adding value to the city. They try to organize events to get The Hague on the map again, to create spots where people from all over the country can come to The Hague for.

PIP The Hague is an excellent example of this, they are one of the few venues that can be described as a club. They use a more cultural approach in organizing events. They are part of a new wave of hedonistic electronic parties, like there were before, now properly organized with new norms and values. PIP was instrumental in my own musical development. Whenever I had an idea they gave me a podium. I was able to practice my stage presence, it was part of my musical upbringing. When I started developing more and more, word started going round. I started with an audience consisting of not more than 4 people in PIP. Happily, slowly more people started coming over the years. It is a gift playing at a festival with 2000 people now. Nonetheless, that beginning with these 4 people, I hope every artist gets to experience that, it’s the start, with just you, nobody knows you, getting these very first compliments. That is what PIP The Hague was for me.

It is amazing that artists like me can just fool around with hardware, share music with people, doing what they love, it’s simply kick-ass! This is the reason I will never stop talking about music, where I come from and what my track ID is.

Why do you like to work with vintage hardware?

To be honest, I made the decision to buy vintage hardware because of economic reasons. Synth’s from the 70s are fun, new synths are fun, but cost astronomical amounts of money! I am a graphic designer and I thought, let’s buy something sufficient, but cheap. This ended up being the Roland MC-303. It is just fine for making rhythms and sampling. I even made my entire album out of it and a live set. I have two Roland’s, they are exactly the same. They talk with each other and have the same packet of sounds and rhythms. I create songs and record them in Logic. I am a big fan of complex, glitchy set-ups, but not for this project. It just worked to do it like this. All the sounds in it were put in there in 1996 in some random factory and that’s it! I am very limited in what I can create, but that makes it interesting. No SD cards, no additional samples, you can not save anything. If you lose this synth, to put it mildly, you are fucked. Sometimes this Roland takes me on a walk. One time I posted something online showing the Roland with all the cables. I love it when hardware just does what it wants, and doesn’t always listen to what I want. Identified Patient (Job) commented on the post saying ‘’That’s the way you like it, right?’’ I had to laugh, that is exactly what I like, it adds to the charm.

''All the sounds in it were put in there in 1996 in some random factory and that’s it! I am very limited in what I can create, but that makes it interesting.'' - Dazion

How did your release come together, aside from playing around with the Roland MC-303?

The release started the way I myself started, in The Hague. I wanted to create an ode to that The Hague time with my album. Almost all the songs on the album are named after a long gone The Hague club. In 2019, I started talking to Dekmantel about some of the songs I made. It was a dream I was working towards, to release at Dekmantel. When I knew this dream was coming true, I started to further develop the concept. Thinking back to when I was younger, it reminded me of CD’s. Back in the 90s, all we were listening to was CD’s. If you were lucky, you had a friend with a PC who could copy a CD. The original CD often disappeared, and many copies were going around. I wanted my release to be on CD, I wanted people to make copies of it, the way we all did in the past. Then Corona happened, and it was difficult to release the album all together. This gave me more time to write some additional songs. After a while, we decided to release the album on vinyl and a small batch of CD’s. I made the CD’s all by myself. I copied them, printed the covers and folded everything together. Another idea was to shoot some polaroids on the spots of the old clubs my songs were about and the gear I used for the release. I added a unique polaroid to every CD. I wanted to give people something personal. 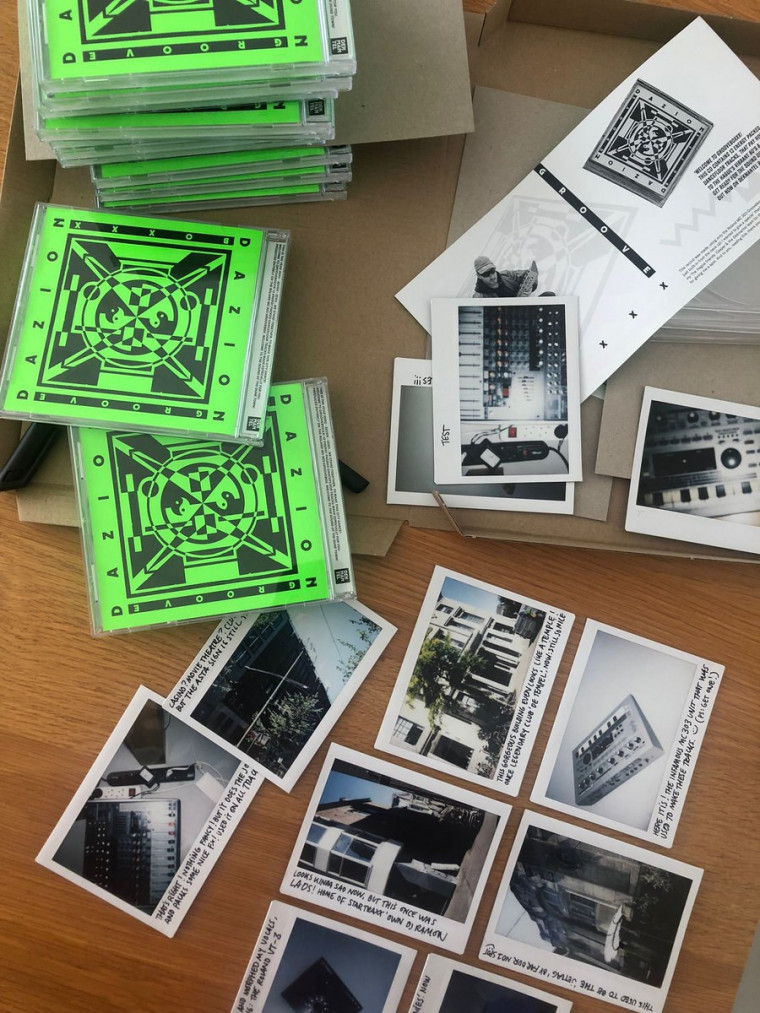 You also designed the artwork right, how did you do that?

That’s a funny story. At first, I wanted to contact Dadara. He was an artist from Amsterdam who did many artworks (among other really cool things) for CD’s in the 90s. I went to one of his expositions to talk to him. Maybe as expected, he asked a lot of money. Because of that, I decided to design it myself. When I was in a club many years back, I saw this spacey digital art piece. No idea where it was. I used that as my inspiration and started jamming. I knew immediately that the cover needed to be neon green. It reminds me of the old ‘Turn Up The Bass’ albums, who always had these neon colors. If I saw CD’s like that, they just popped into my eye. I would love for that to happen to my vinyl in stores. I want to blind people with the cover, some old school tactics.

You performed during Dekmantel Festival and played some songs of your new album, what was that like?

It was amazing! I was able to create a really cool set, a little out of the box. I did not manage to play all songs from my album, because one of my Roland’s was stolen a while back. So shitty. Happily, I had everything digitally, but still it was difficult to perform all songs live. I did create some new songs that I also played. Things didn’t go as planned, during the festival the power was off for a bit. It took me back to the times when I was just playing music for four people. That is sometimes just part of it. Above all, it felt great to perform at Dekmantel Festival. 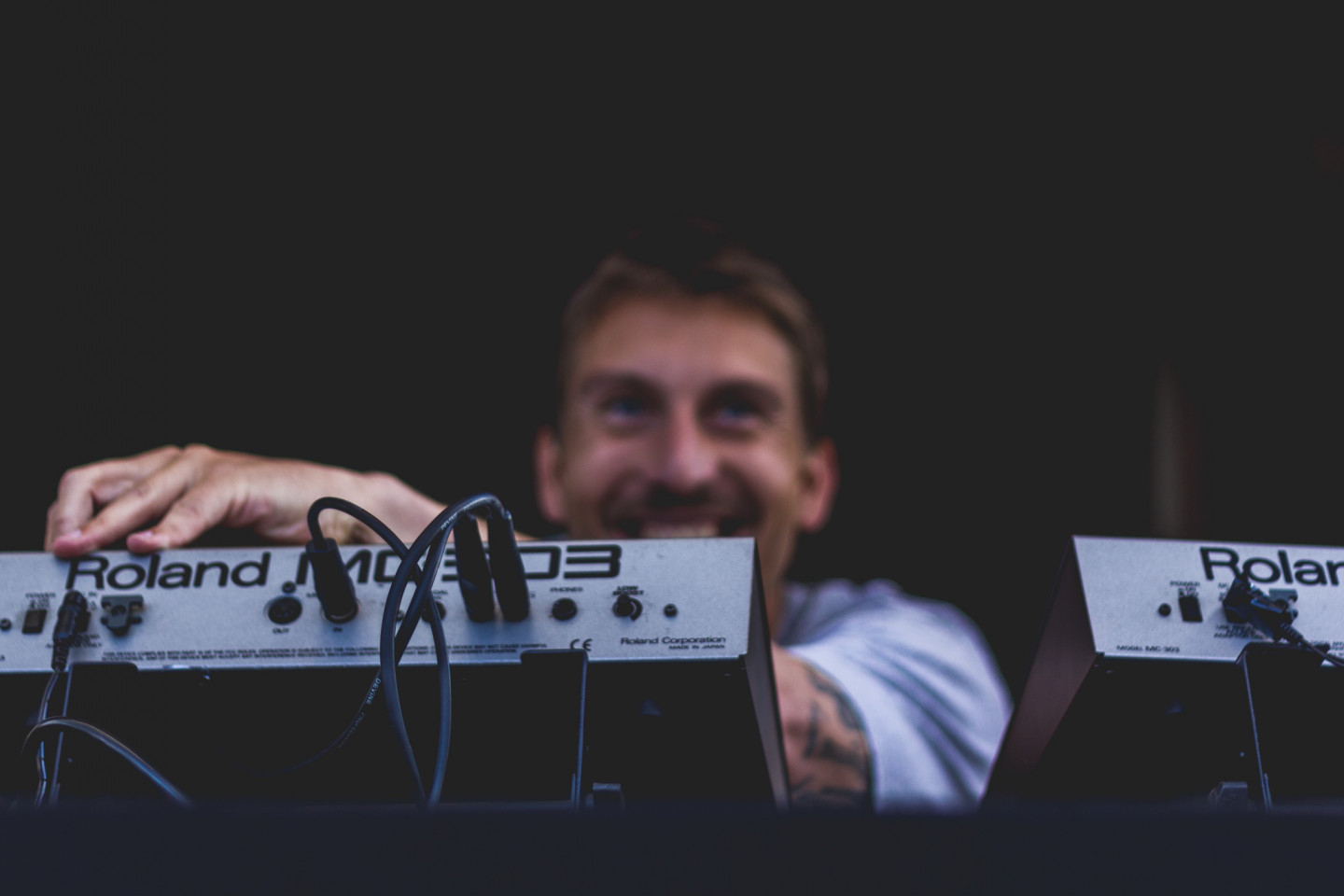 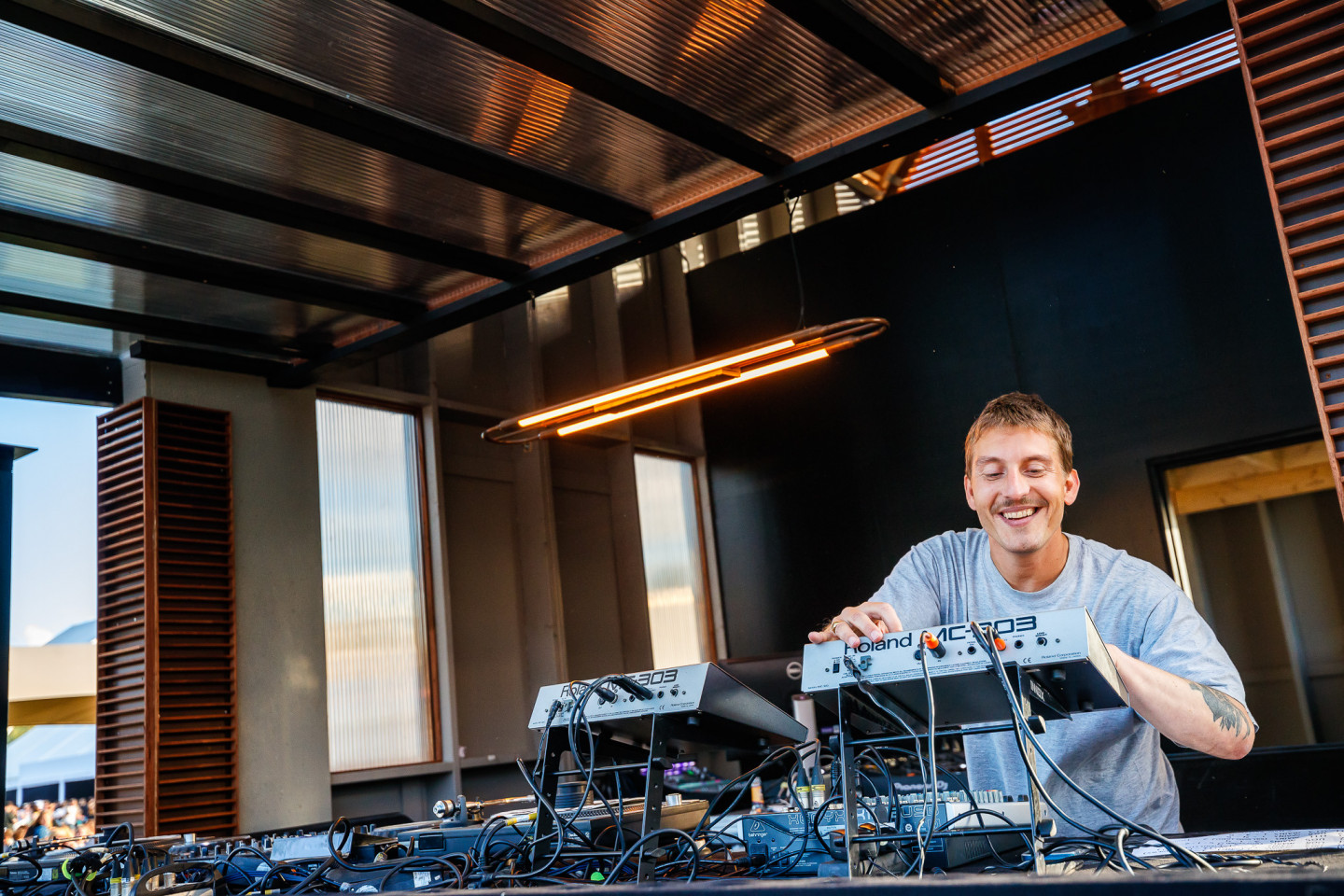 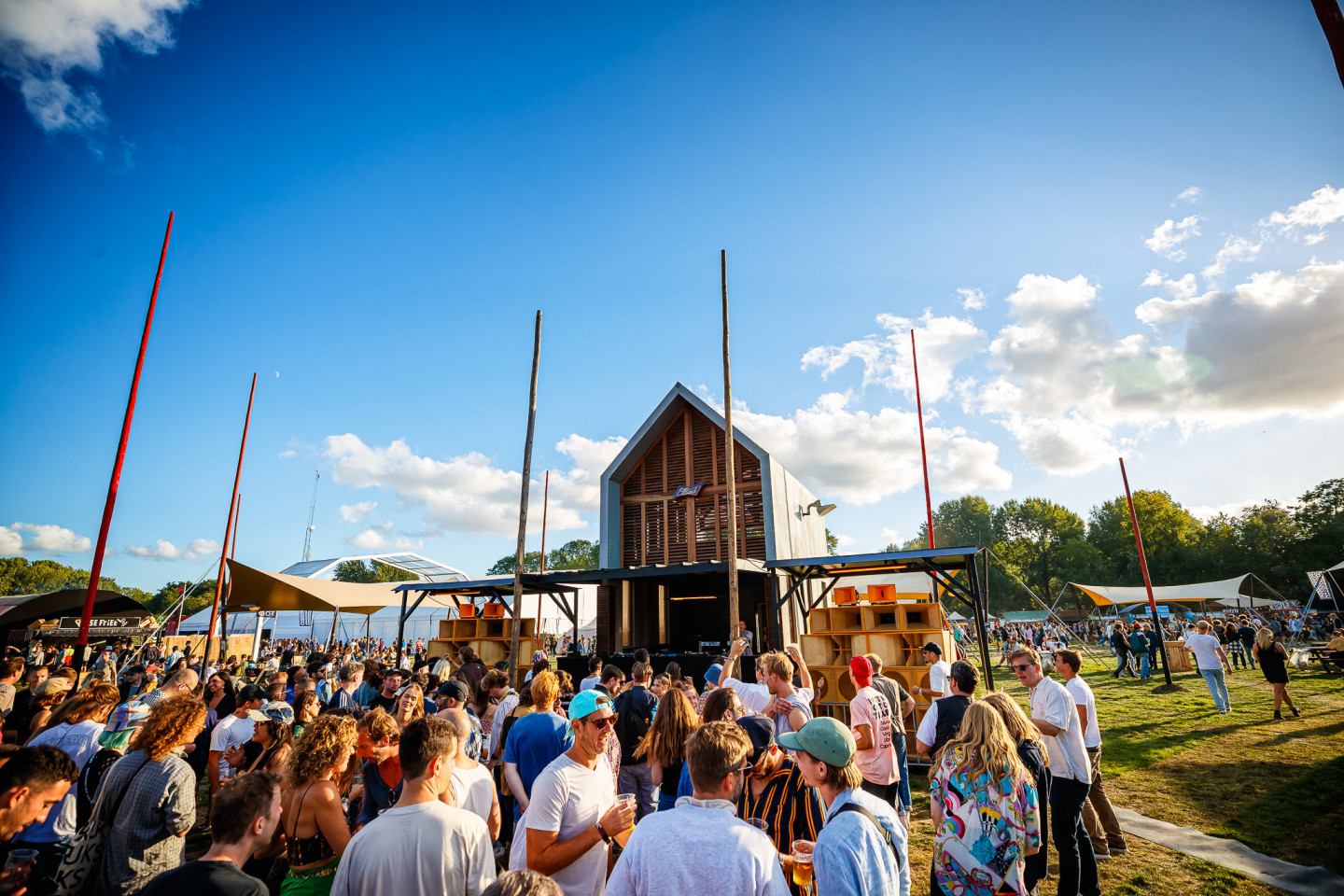 And you also produced something else for Dekmantel, you created the sound clips that accompanied the artwork during the Dekmantel Festival 2022 line-up announcement, right?

The deadline was killer for this one! Nonetheless, I really wanted to do this. The bar was high and this was a different sound than I usually create. I surprised myself when I heard the outcome, it was out of the box for me. I hope it showed people that I am fascinated by many sounds and want to share these different impressions. These sound scores and my Dekmantel release feel like two different worlds. I can’t wait to continue making more music in the type of style the sound scores are in. It’s on my planning for next year. Currently, I am looking for a new studio space. I just want to sit down somewhere and make new stuff. There are so many tracks in my head, I want to put them into my machines.

So you can’t wait to write new music, any other cool plans ahead?

It is my duty to never bore people with my music. I want to surprise them. Sometimes when I’m in the studio, I even surprise myself. I want people to think about what they just heard, it makes me have more fun too. Some more of that is coming up. Secretly I am slowly looking for a live set with guitar pedals, something for the dance floor. There is just so much to enjoy in the world of music. It's like cooking food, every time you want to try something new. A slight change can change your sound, or your dish. When I hear a song I just want to share this with the 2000 people in front of the booth, that is what I really feel.